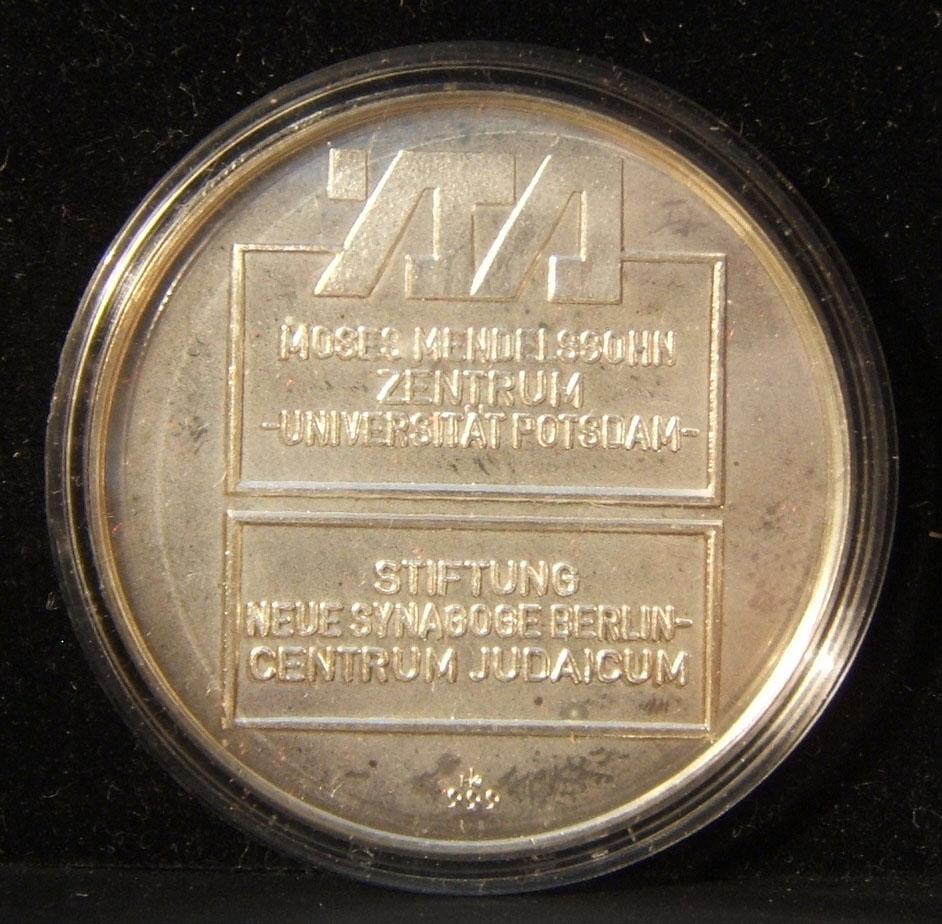 Hover to Zoom, Click to Enlarge
Ask a question about this product
Log-in to Bid
Description
Germany: Moses Mendelssohn Center ("Moses-Mendelsohn-Zentrum") award(?) medal (ND); in .999 silver (proof state), by Helmut König; 40.5mm, 34.45g: obverse depicts emblem of the Center, which is the stylized twin Hebrew letters "Mem" and "Mem" (for Moses Mendelssohn) above simple boxes with the text names of the Center at the University of Potsdam and the Foundation of the New Synagogue of Berlin "Centrum Judaicum"; reverse: Mendelssohn's bust facing right with his name and dates of birth/death.

Prior to 2009 this may be the design as evidenced by the medal's size in the photo of Charlotte Knobloch's presentation in 2008 and the implication of the image shown on the website of the MMZ (which shows an image of the reverse of this medal on its page about the "Moses Mendelssohn-Medaille"); as of 2009 however, this is not the actual medal (which is now much larger and depicts a left-facing bust of Mendelssohn, as seen in the photo of Daniel Barenboim receiving the award). This particular piece was aquired by the consignor before 2009: as of 2009, lacking any special subject content on the medal, if this medal is still produced it may be for participants of the ceremony (in line with its apparent depiction of the institute's website), since the center would be too small to produce a silver medal like this for the mere purpose of memorabilia. The "Moses Mendelssohn Medal" has been awarded annually since 1993 "to deserving individuals who have shown commitment to the purposes and in the tradition of thought of Moses Mendelssohn for international understanding and tolerance and against xenophobia. The figures are honored with the medal in their work with the goals of our institute in accordance with their commitment and promote the dissemination of the idea of tolerance in society." No sources as yet indicate how many such medals are produced annually, though only 1 is awarded each year, so rare.