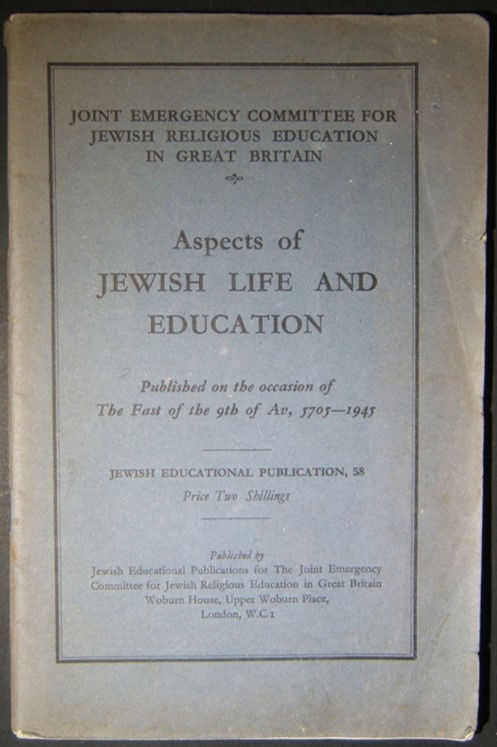 Hover to Zoom, Click to Enlarge
Ask a question about this product
Log-in to Bid
Description
Aspects of Jewish Life and Education - published by the Joint Emergency Committee for Jewish Religious Education in Great Britain, London (publication #58), on the occasion of the fast of 9th of Av 5705 (19 July 1945); 68pg + thick paper jacket - all intact, light edge wear + few minor tears to cover. Post-Holocaust era booklet contains articles by various figures (Rabbis Dr. Altman, Lehrman, Gottlieb, Mayerowitsch, Epstein, Friedlander; Dayan H. Lazarus, Cecil Roth, etc.) on aspects of the Holocaust experience, the significance of the 9th of Av and on the then-present situation of Jewish education and future; with opening comment & observations by the founder of the JEC, Nathan Morris (1890–1970) + artwork by Jakob Sohn. The JEC established classes for children in places far removed from the large population centers; at the end of the war Morris took charge of the programs of the Central Council for Jewish Religious Education in the UK & Ireland, and later founded and headed the Jewish Agency's Department of Education and Culture (1949-1959); he also wrote the 3-volume study (1960-64) on the history of Jewish education from the Tannaitic period to the present, "Toledot ha-Ḥinnukh shel Am Yisrael".