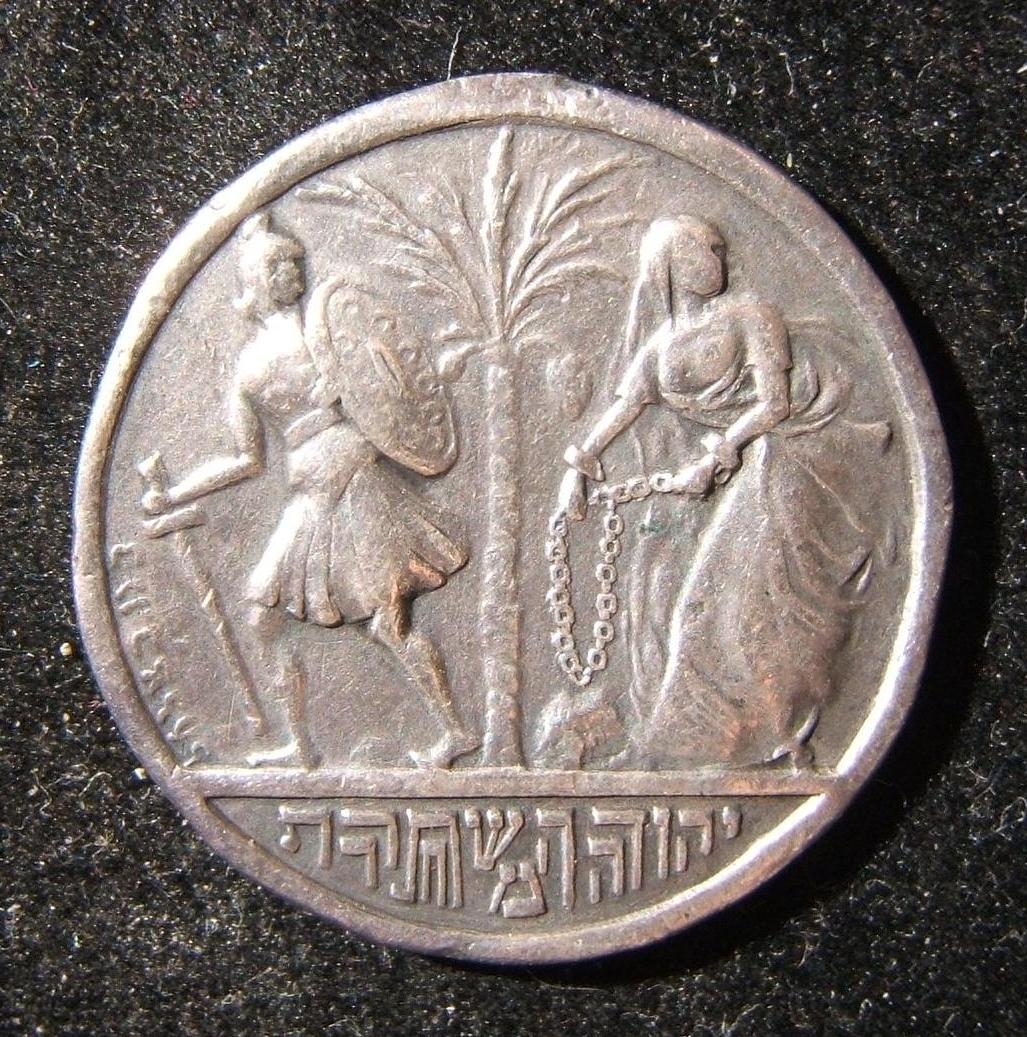 Hover to Zoom, Click to Enlarge
Ask a question about this product
Log-in to Bid
Description
Palestine: 1918 "Eretz Israel Volunteers Medal", by Boris Schatz (Bezalel); size: 2.45cm; weight: 6g. Obverse: antithetical design of Roman 'Judea Capta' coinage, here depicting "Bat Zion" freeing self from Roman captivity with Hebrew legend "Judea Freeing Herself" in exergue; medallist's name "B Sh Bezalel" at left. Reverse: Kabbalistic symbol with letters of "Shma Israel" and Hebrew legend "For the Volunteers of the Nation in Eretz Israel" & Hebrew date 1849 for "1918" (per dating method as of 70 AD, destruction of 2nd Temple). Issued on 4 July 1918 to local Jewish volunteers setting out to join the 40th Royal Fusiliers (one of the 3 Jewish battalions of the 'Jewish Legion'). This was the first modern military medal ever issued by Jews for Jews - and more so for service in the land of Israel.

Although seldomly encountered and not a standard catalogued item, there is a very precise account of its issue in Ever HaDeni's book "A Nation in its Wars" (publ. 1948; pg. 104): "In mid June-July [month of Tammuz, 1918] there was organized a large assembly at the ruins of the home of Rabbi Yehuda the Chasid in Jerusalem, with the participation of James Rothschild and his escort Lieutenant Lipsy. The son of the Baron [Rothschild] delivered a speech on the importance of the Hebrew [i.e Jewish] Battalion which would fight shoulder to shoulder with the British. After him, spoke Lipsy and the Rabbi Charlap, who said: 'Who is the G-d fearing and good hearted man who will go forth and return to his home.' The wise man Laniado gave support to his son the volunteer and at the same time people distributed fliers sponsored by the Battalion committee with the cry 'Long Live the Hebrew Battalion'. Students of the seminar answered the call and from sixty men, close to 40 enlisted as did 17 year-olds and teachers from the Boys' School. Fathers took with them their sons; mothers sent their children to enlist and brides sent their husbands. The Yemenite community sent upwards of 50 people (from Jerusalem); and volunteers from the religious Yeshivot also came. On 4 July 1918 in the morning, after the departure ceremony, the volunteers were issued a "Bezalel" made medal on which was stamped, 'Bat Zion Who Broke the Chains of Exile' - and depicting the Roman running away from her. At 12 o'clock the volunteers set out by train, accompanied by a crowd of 10,000 people."