Albanian military award for...
◀ Back to: Auctions 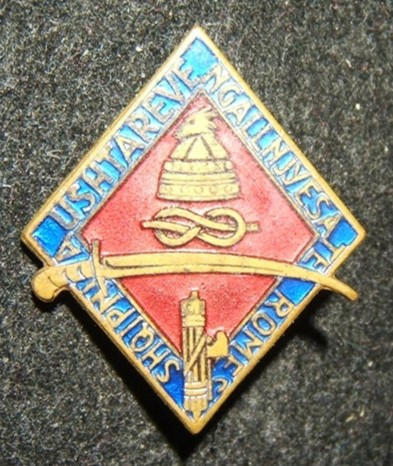 Hover to Zoom, Click to Enlarge
Ask a question about this product
Log-in to Bid
Description
WWII Italian/Albanian Campaign Veteran's Commemorative Badge, 1942; manufactured by Stefano Johnson of Milan-Rome; 24 x 28mm; 4.8g. The metal pin is diamond-shaped, in blue and red enamel, with emblems of the helmet & sword of the Byzantine era Albanian national hero Georgios Kastriotis - Skenderbeg, the knot of Savoy, and the Fascist Party's fasces device at lower-base. The Albanian legend around the edge reads "Shqipnia Ushtareve Ngallnjyesa Te Romes" ("Albania, to the victorious soldiers of Rome"), with vertical safety-pin back. This award was instituted in May 1942 by Ministerial Order 356 and awarded by the "Albanian Government" to the Albanian military personnel who participated in the Italian Army's military operations in Greece and Yugoslavia between 28 Oct. 1940 and 23 April 1941. Albania was a forced single-party Italian protectorate as of 7 April 1939, led by a local branch of the Italian Fascist Party (which also enacted anti-Semitic legislation but largely did not physically harm the Jewish community - prior to 1943). She served as the staging base for Italy's invasion of Greece (Oct. 1940) but her army largely deserted the front-lines, weakening the Italian operation. These badges have been observed maker-marked Boeri of Rome as well as being unmarked.