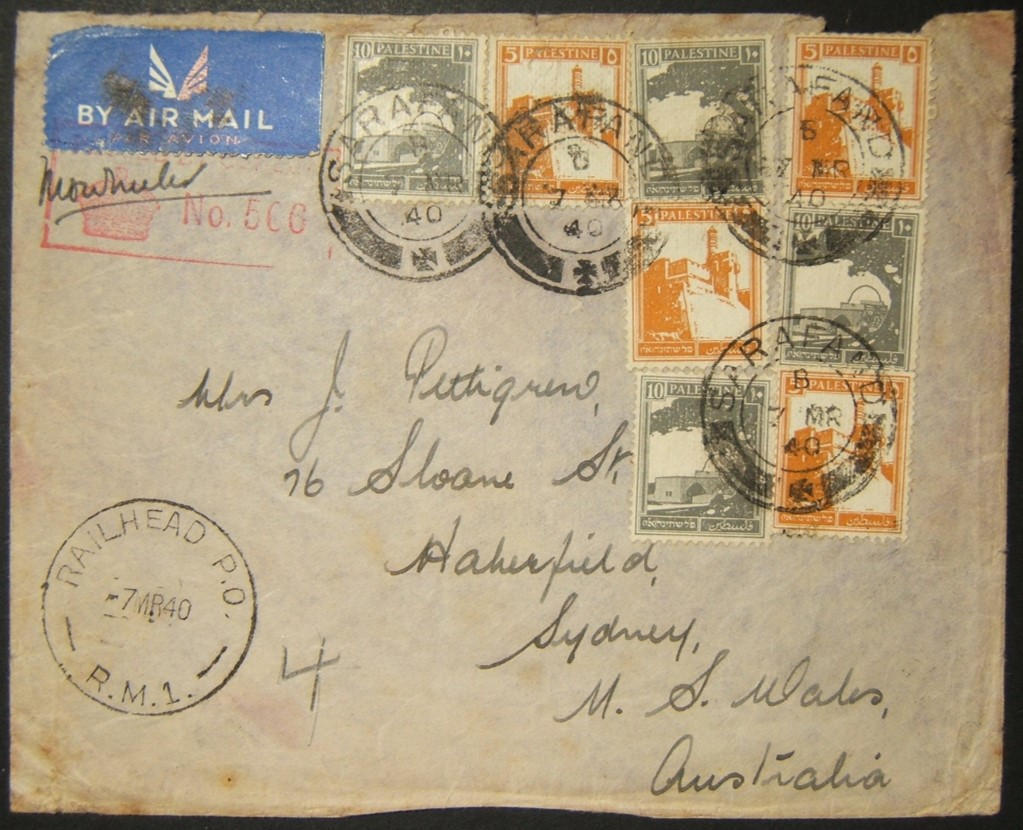 Hover to Zoom, Click to Enlarge
Ask a question about this product
Log-in to Bid
Description
Early WWII Palestine military airmail: 7 MR 1940 airmail cover on civilian stationary from Palestine to SYDNEY Australia, franked 60m in checkerboard pattern using 4x 5m & 4x 10m Pictorals stamps + British "Air Mail" etiquette at top left; as cover itself tied by Australian Army RAILHEAD P.O. R.M.1. travelling post office (TPO) circular date-stamp, the cover originated in the GAZA area with a unit of the [Second] Australian Imperial Force, probably a sub-unit of the 6th Division (the AIF's only unit at that time) at KHASSA CAMP: prior to 5 April 1940 there were no (British) Army Post Offices in wartime Palestine and all military-originating mail was handled by the civilian post office; soldiers were then still "on a peace-time footing and not under active service" (Proud p.144), as such this cover was not marked "OAS" and simply transfered into the civilian post office at SARAFAND (the largest military base in the Middle East at that time), where the franks were tied by 4 strikes of the local civilian postmark (Dorf-7).

Of note, Proud notes that field censorship was introduced at the same time as the Army Postal Service in Palestine, but the officer-endorsed red British #566 boxed censor handstamp partly on the etiquette shows that censorship existed beforehand - and as overstamped by the civilian postmarks, probably censored prior, at SARAFAND CAMP before transfer to the civilian post office; per the postage rate the cover was carred by Imperial Airlines on the "Empire Route" via CAIRO (although not censored there); opened roughly at back, backflap missing. Of further note, Stobbs records the RAILHEAD cancel was in use at GAZA RIDGE from 1 March to 16 April 1940 by the 211 AGH (Australian General Hospital), and later used as a TPO cancel until March 1941 - Proud does not record any usage for this cancel at this time. Rare postmark & pre-APO period military mail + early Australian WWII military mail from Palestine.