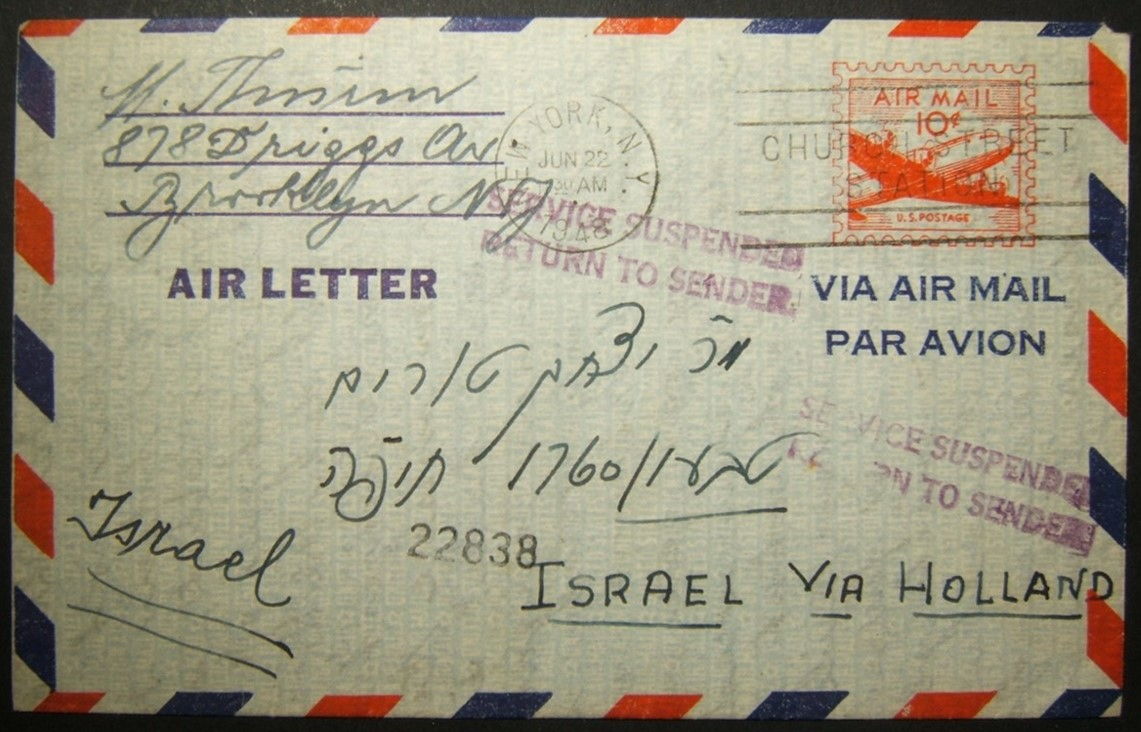 Hover to Zoom, Click to Enlarge
Ask a question about this product
Log-in to Bid
Description
1948 US "service suspended" mail to Palestine - sent via PEDI: 22 JUNE 1948 air letter from BROOKLYN to TIVON via Haifa, franked 10c per pre-printed stamp & tied by local machine cancel; here posted 4 days before actual resumption of unregistered airmail services from the US (announced officially on 29th) & marked by NY Post Office by 2-line "SERVICE SUSPENDED | RETURN TO SENDER." instructional marking handstamp (Kibble unlisted - this very unusual; similar to K-III but reversed text lines and in all CAPS); as per serial number on front "22838" and possibly per manuscript instruction "Israel via Holland", the letter was resent through the PEDI air mail servce - rare here as cover not cancelled by that service's date-cancellation device but serial number corresponds to June 24th shipment; PEDI covers are known uncancelled by the service but this is very rare.

Of interest also is that IFPL p. 105 illustrates a cover posted in Beacon NY in afternoon of same date and being transmitted by US postal service. "Palestine Emergency Deliveries Inc." was a private company founded by the Jewish Agency in New York, to collect mail and send it to Israel at a time when the British ceased their postal activities in the Mandate and air links to it were suspended. PEDI mail was carried as baggage, first on a KLM flight to Rome (ref. instructional marking on front), and then forwarded to Israel by Czechoslovakian airlines. Opened gently at back; message partially in German & in Hebrew. Lacking additional postal markings as not registered mail, this is an intriguing cover.