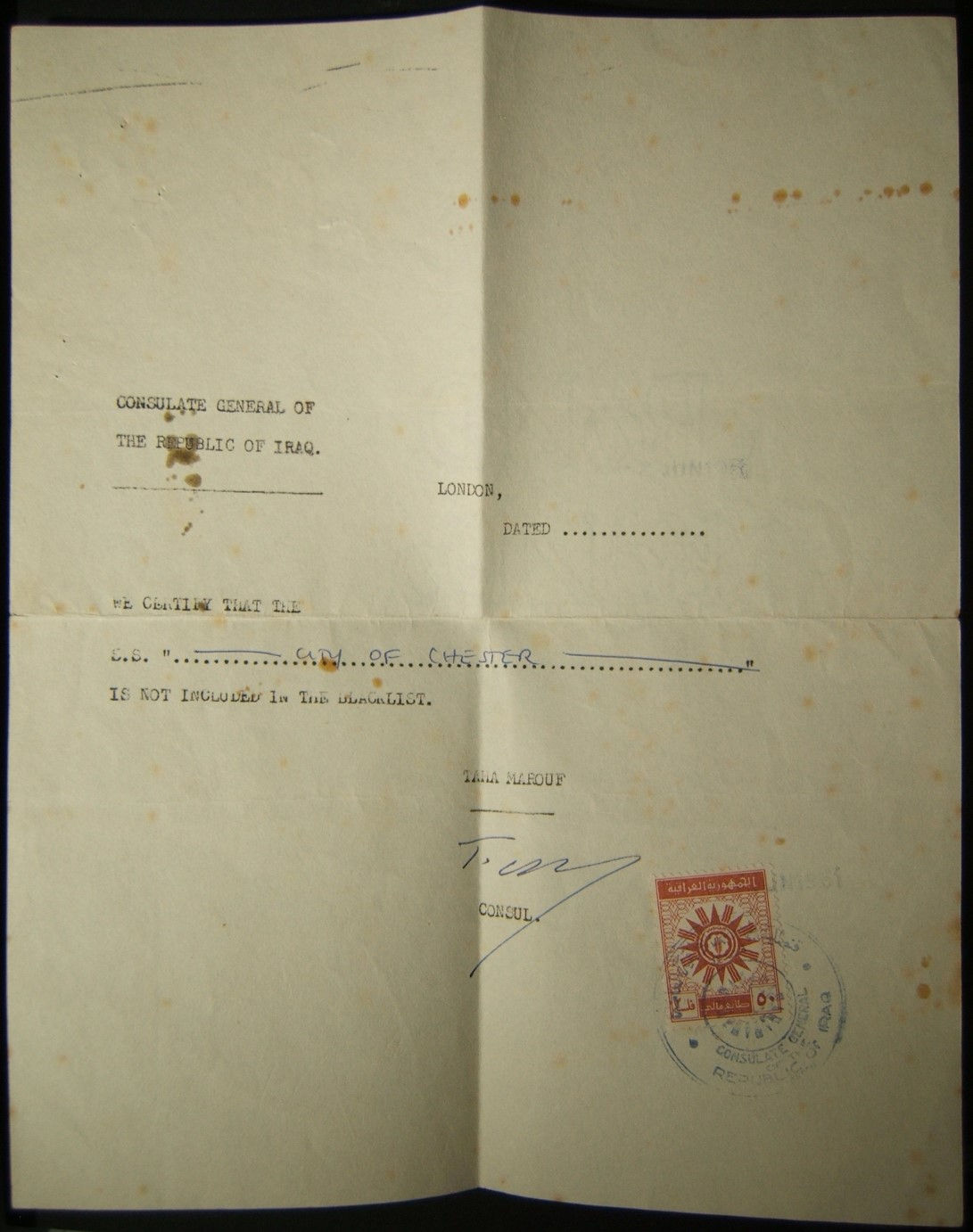 Hover to Zoom, Click to Enlarge
Ask a question about this product
Log-in to Bid
Description
Arab Boycott of Israel 'blacklist' document: 2 JUN 1961 mimeographed document-form on 'Roneo Bond' watermarked paper from the Consulate General of Iraq in LONDON certifying that the ship S.S. City of Chester "is not included in the blacklist"; signed by the consul Taha Marouf & tied by a 50 Dinar consular stamp stamped by the Consulate's round illustrated cachet + dater (and also towards top of page). Taha Muhie-eldin Marouf (1929-2009) was an ethnic Kurd in Saddam Hussein's Ba'ath Party leadership (joining it in 1968); he served as ambassador to Italy, Malta and Albania, and served as Vice President of Iraq from 1974 until the US invasion in May 2003; Marouf was on the US's list of most-wanted Iraqis & represented in the "Most-wanted Iraqi" playing cards. The named ship was built in 1944 (scraped circa. 1971) and belonged to Ellerman Lines, a British cargo and passenger shipping company. The significance of the ship not being on the "blacklist" is that neither it not its parent company had any dealing with the State of Israel.

The blacklist is a register of global firms that engage in business with Israel, and is maintained by the Damascus-based Central Boycott Office - a specialized bureau of the Arab League, and is disseminated to Arab League members. The League is an umbrella organization comprising 22 Middle Eastern & African countries and entities, and has maintained an official boycott of Israeli companies and Israeli-made goods since the founding of Israel in 1948. Ironically, the son of the co-founder, John Ellerman, Sir John Reeves Ellerman, 2nd Baronet (1909–1973), helped Jews escape Nazi Germany and even earned the wrath of William Joyce ("Lord Haw-Haw" on the radio) who attacked him by name in his propaganda broadcasts, incorrectly claiming that he was of Jewish descent.