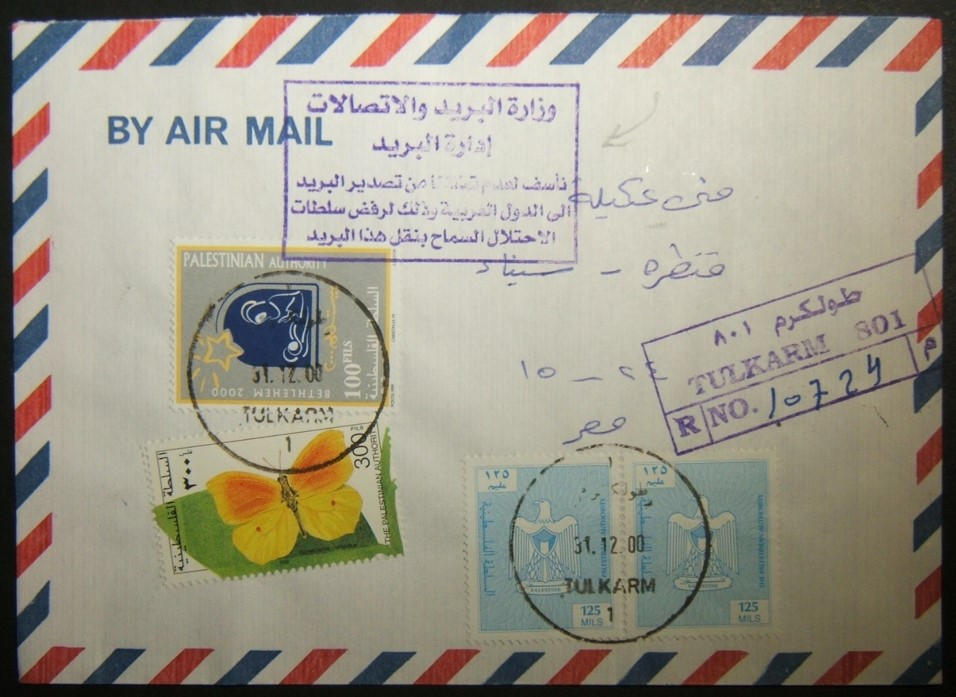 Hover to Zoom, Click to Enlarge
Ask a question about this product
Log-in to Bid
Description
2000-2001 2nd Intifada Israeli "no service" of Palestinian Authority outbound mail: 31-12-2000 new years eve registered airmail cover from TULKARM to QANTARA (Sinai, Egypt), franked 650 Fils & tied by 2 strikes of the local German-made metal postmark; here posted three months into the 2nd Intifada period: refused service by Israel, which handled PA mail abroad (as it is not a member of the Universal Postal Union, UPU), and which during the period of December 2000 and March 2001 refused postal service abroad to the PA - and returned it to sender; backstamped 10-01-2001 101 REGISTERED CENTRAL SORTING [RAMALLAH] transit where the cover was marked on the front with a special "protest" 5-lined boxed handstamp of the PA Ministry of Posts "We apologise for not being able to forward this post to Arab countries due to the Occupation Authority's refusal to allow it". As a matter of procedure in any case this cover would have been refused service by Israel as it bore 125 "Mils" denominated "eagle" definitives: PA stamps had to be denominated in Fils and not in Mandate-era Mils.