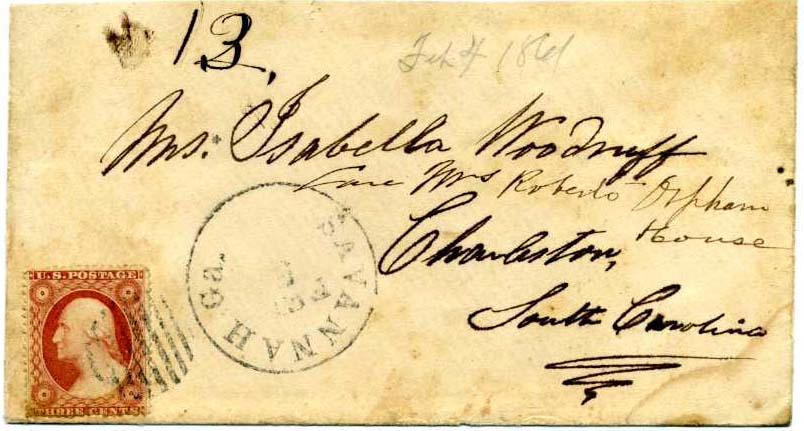 Hover to Zoom, Click to Enlarge
Ask a question about this product
Log-in to Bid
Description
Independent States & CSA Use of US Postage > Georgia & South Carolina - 1st Day of the Confederacy: Feb. 4 1861 (1st Day of Confederacy) docketed cover from SAVANNAH Georgia to CHARLESTON South Carolina, franked 3c per period (US) domestic letter rate using US #26 dull red Washington Type III stamp, tied by round grid obliterator & FEB 5 [1861] local circular date-stamp in field (1st full day of the Confederacy); addressed to Mrs Isabella Woodruff Care Mrs. Roberts Orphan House. The earlier dated docketing, in the absense of the original letter, suggests the cover may have been couriered from the locale of the sender and deposited at the post office in SAVANNAH, where postmarked/dispatched the next day.

Georgia seceded from the Union on 19 Jan. 1861, becoming an independent state for 16-17 days (per Walske, 17; per CSA catalogue, 16); the Confederacy is generally considered established as of 4 Feb. with the start of the Convention of the 7 Seceding States, which included Georgia & South Carolina (the Confederacy was formally established on the 8th). Here a cover handled & dated during the State of Georgia's last day of independence AND 1st day in the Confederacy - using US postage and the US postal service (this suspended to the Confederacy as of 1 June 1861) + and 1st day inter-Confederacy mail. Slightly reduced at top with tiny edge tear. Some correspondents record the number of their letters: the overwritten "12" with "13" on the front, whose ink corresponds to the additional text in the address, may indicate that this letter was originally intended to be the 12th in the series and later changed to the 13th.