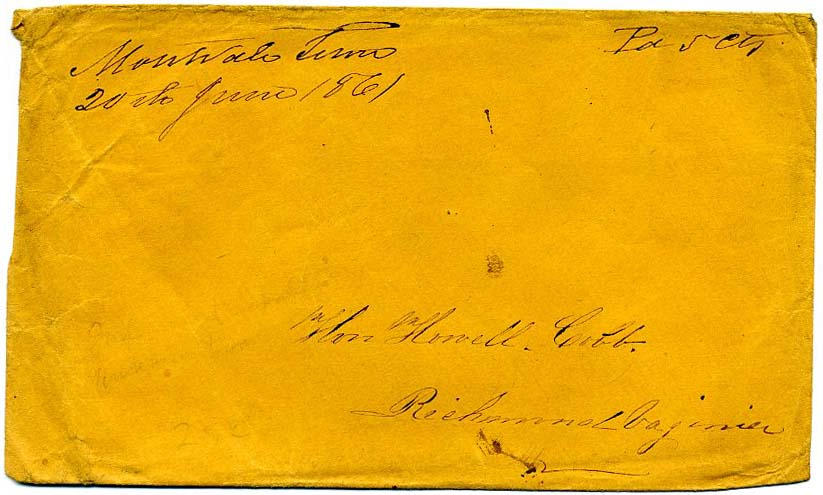 Hover to Zoom, Click to Enlarge
Ask a question about this product
Log-in to Bid
Description
Interim Independent / Confederate Tennessee era mail: stampless "MONTVALE Tenn 20th June 1861" manuscript dated cover to "Hon. Howell Cobb, RICHMOND, Virginia", with manuscript notation at top right "Pd 5 Cts". Interesting postal history: the Confederacy suspended Federal mail service within its borders as of 1 June - but not in Tennessee, whose government had not yet passed an Ordinance of Secession. The Ordinance was passed on 8 June, which initially turned the state into an independent state: although Tennessee only officially became a part of the Confederacy on 2 July, already on June 10th the Confederate postmaster general formally suspended US mail operations in the middle and western zones of the state - but not in the east, where the small locale of MONTVALE is located, which opposed secession.

Not a trivial matter: Tennessee would furnish more troops for the Union than every other Confederate state, combined. On 17 June the Confederacy took full control of the mail service in the whole state, and Tennessee formally joined the Confederacy on 2 July.

During the period of 1 June and 2 July the local postal service operated according to various and oftentimes contradictory procedures. Here this cover was postmarked per the newly instituted Confederate postage rate for letters whose delivery was under 500 miles: postage according to a system/legal authority not yet legally adopted by the independent state. From 1 June to 2 July there are no known instances of US postage stamps used on Tennessee mail, hence the manuscript franking as her. Intriguingly for mail from this Eastern zone, the addressee, Howell Cobb, was one of the founders of the Confederacy and served as the President of its Provisional Congress. The CSA Catalogue considers this Independent Tennessee State mail.