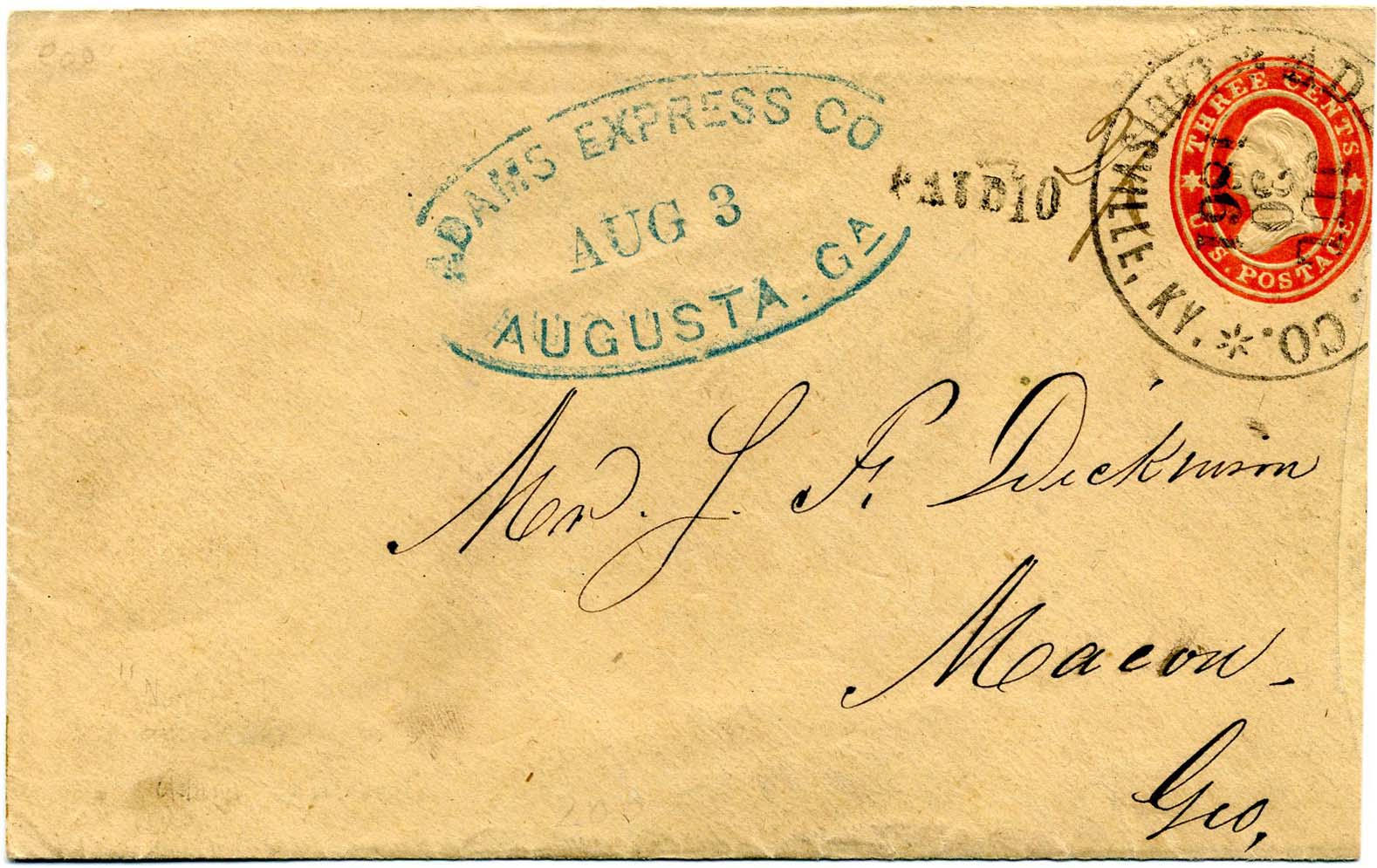 Hover to Zoom, Click to Enlarge
Ask a question about this product
Log-in to Bid
Description
Southbound Across-the-Lines Private Express mail: JUL 30 1861 postmarked 3c star-die envelope (US #U27) from LOUISVILLE Kentucky to J. F. Dickinson of MACON Georgia, carried by the Adams Express Company, which tied its full-dated ADAMS EX. CO. circular datestamp to the embossed frank; the manuscript "2/-" near the frank was shorthand for the total express charge to pay over and above the domestic US postal fee (3c), 25 cents or "2 bits" - expressed as "2/-", as here & rare as usually not expressed on southbound mail.

The cross-border Adams express service required that southbound mail be enclosed within a pre-paid 3 cent US postal stationary cover (as per the US Postal Act of 1852, permitting courier services), itself placed in an outer envelope with the appropriate express fee enclosed and sent to the service's office in LOUISVILLE; there it was carried across the lines (initially by the LOUISVILLE-NASHVILLE railway line, then after expropriation by the CSA on 4 July, by horseback) to NASHVILLE, where it was sorted & placed in closed mailbags and forwarded by the express service to its furthest office in the direction of its destination, here AUGUSTA, where the inner cover was stamped AUG 3 by a full strike of the Adam's local office oval cachet on its last known date of use, and the cover entered into the CSA postal system for final delivery to MACON & tied by local unframed straight-line PAID 10 instructional mark on the front (similar to CSA Catalogue type I but narrower digits) to indicate that the Confederate postage rate had been paid (out of the 25c remitted to Adams for their service) - as the distance between the 2 locales was 121 miles and less than 500 for the 5 cent rate, the postage paid was probably double-rate for a 1 ounce letter.

This is a late-dated deep-south posted cover as from 5 AUG, Adams carried express mail only as far south as their NASHVILLE office before entering it into the Confederate postal system, and in any case the US Government forbade the continuation of across-the-lines express from 26 August (effected on the 30th). Carefully trimmed & repaired at right with bottom back flap added. Ex Knapp and Fisher, 1997 CSA certificate. CSA catalog type AES-02b valued at $2,500. Attractive cover with superb markings. Intriguing point of origin: Kentucky was a "border state" in the Civil War, which declared its neutrality in the conflict & de-facto "independent", but it housed both a pro-Union and a shadow pro-Confederacy government; its neutrality was violated by the Confederate Army on 4 Sept. 1861 causing it to side with the Union; LOUISVILLE itself was a Union Army stronghold.