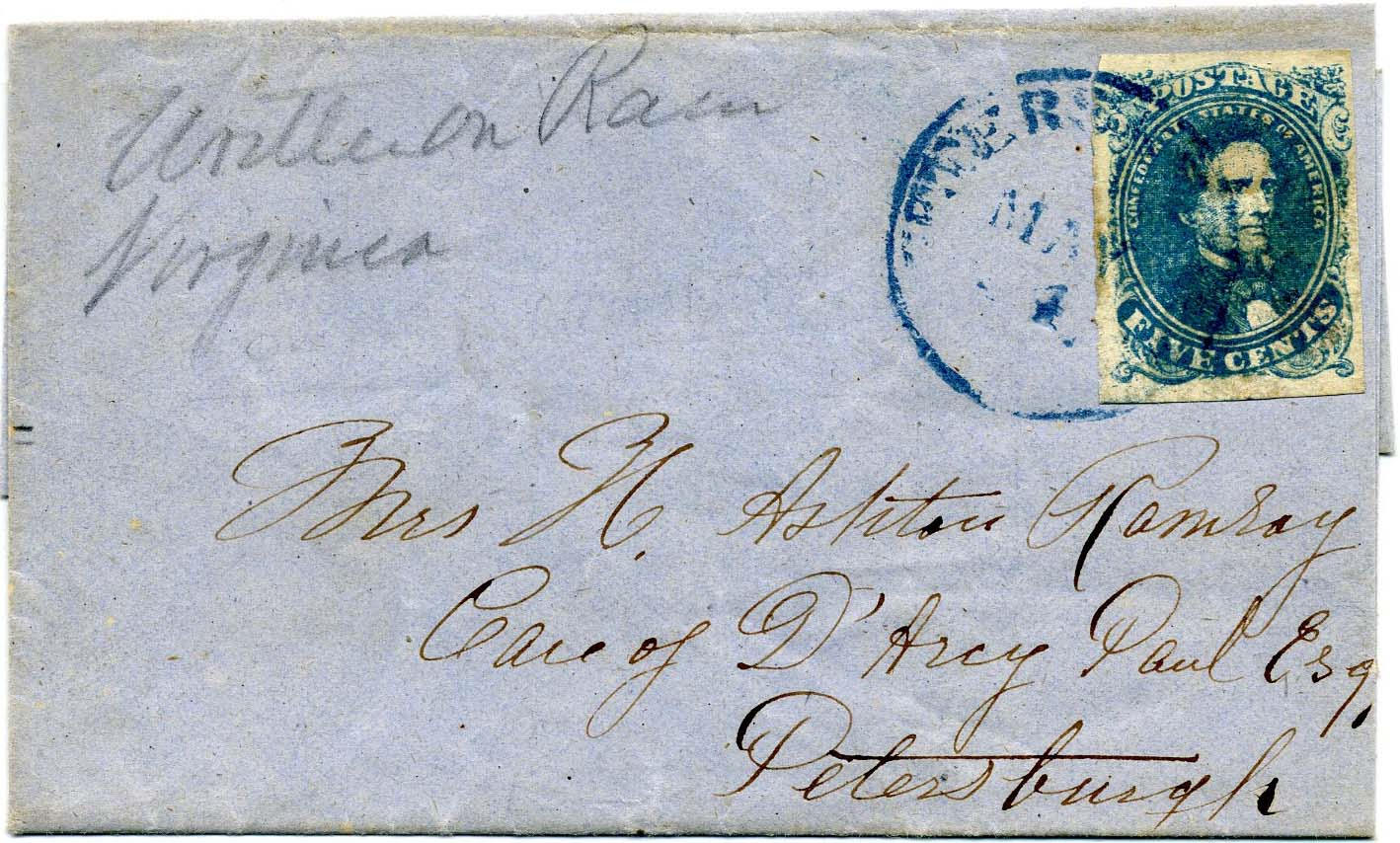 Hover to Zoom, Click to Enlarge
Ask a question about this product
Log-in to Bid
Description
Confederate States Navy / "MERRIMACK" / drop-letter rate mail: MAY 4 [1862] postmarked folded cover to Mrs. H. Ashton Ramsay, Care of D’Arcy Paul, Esq., PETERSBURG [Virginia], franked 5 cents using a single blue CSA 4-2 stamp with large to full margins, affixed with red sealing wax & tied by single strike of local postmark in blue - this being an overpaid 2 cent drop letter rate cover (eg. mailed to a local address at a post office without delivery service, and picked up by the addressee as like "poste restante" mail - in Civil War mail often evidenced by "care of" addresses); overpaid because pre-franked by the sender & no 2c stamp existed prior to CSA #8 in April 1863. Pencil notation on top left "Written on Ram Virginia" by the husband of the addressee, Henry Ashton Ramsay, the Chief Engineer on the CSS Virginia (commissioned into the Confederate Navy on 10 June 1861 and previously served in the US Navy). The co-addressee, Captain D’Arcy W. Paul served as an officer in Company K of the 12th Regiment Virginia Infantry, Mahone’s Division, in A. P. Hill’s 3rd Corps of the Army of Northern Virginia; he was accidentally killed by a falling tree on 20 January 1863. Ex Warren collection.

The CSS Virginia, also known as "Ram Virginia", was an ironclad ram of the Confederate Navy built from the hull of the scuttled USS Merrimack, part of the CSN's James River Squadron, and together with the USS Monitor it fought the world's first battle between ironclads, at Hampton Roads on 8-9 March; this letter was posted further up the James River a week before (11 May) the ship was scuttled near Portsmouth on the mouth of the river. Historic postal history from a key participant in maritime history. A curiosity: Confederate active service members were eligible for free postage (with the addressee bearing the cost). Though instituted for the Army, members of the Navy & Marines also made use of this exemption. The postage here may have been pre-paid as a courtesy, as the letter was actually being received by someone else for Ramsay's wife.